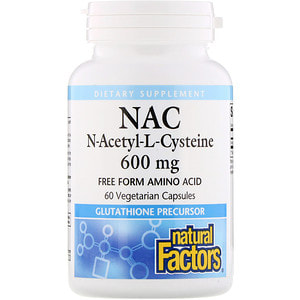 OverviewN-Acetyl-L-Cysteine (NAC) from Natural Factors is a free form amino acid required by the body to make glutathione. Glutathione is a key antioxidant that is involved in many physiological processes, such as fighting oxidative stress, maintaining a healthy immune system, repairing tissues, and supporting overall health. It also recycles other antioxidants.

Medicinal IngredientsEach vegetarian capsule contains:
N-Acetyl-L-Cysteine (NAC) 600 mgNon-Medicinal IngredientsMicrocrystalline cellulose, vegetarian capsule (carbohydrate gum [cellulose], purified water), croscarmellose sodium, vegetable grade magnesium stearate (lubricant).
Suggested UseN-Acetyl-L-Cysteine (NAC) is a highly stable form of cysteine and is a precursor in the body to the critical antioxidant glutathione. It provides antioxidant support and helps to reduce the severity and frequency of influenza-like symptoms in adults over 65 years of age and in those suffering from chronic degenerative diseases.

Advanced InfoN-Acetyl-L-Cysteine (NAC) from Natural Factors is a free form amino acid and a vital part of the body’s antioxidant defence system. It is needed for the production of glutathione, a key antioxidant involved in many physiological processes, such as fighting oxidative stress, maintaining a healthy immune system, repairing tissues, cellular detoxification, and supporting overall health. NAC supplementation has been clinically shown to increase the body’s antioxidant capacity and help reduce the severity and frequency of influenza-like symptoms in adults over 65. NAC is also the most stable and readily absorbed form of cysteine.
Cysteine as a free form amino acid is one step closer to producing glutathione than when cysteine is consumed as part of a complete protein from food. Oral supplementation with NAC also increases glutathione levels more effectively than supplementing with glutathione itself. This is because glutathione breaks down in the gastrointestinal tract whereas NAC does not. It passes into the bloodstream intact.
The 600 mg dosage is supported by clinical research, and is the maximum dosage permitted by Health Canada. This is an ideal nutritional supplement for adults who would like to improve their immune system health. NAC is an effective option for anyone with high levels of oxidative stress or depleted glutathione stores.